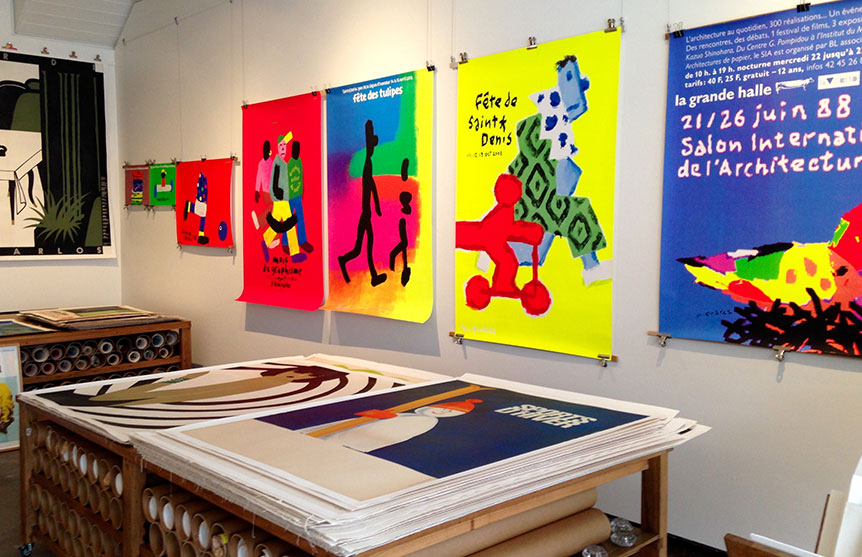 Legendary poster artist Michel Quarez is a bit of a favourite around here, and we’re loving life in the gallery at the moment as our walls are lined with the bright fluro colours and creations of his work.
Come in to visit our new Quarez wall, or have a look at our Quarez section on the site to see the brand new shipment of original Quarez posters.

Michel Quarez is a legend of poster art in France. Committed, intransigent, self-assured about himself and his desires, he has succeeded in imposing his aesthetic and his fluorescent colours.

Born in Damascus in 1938, Michel Quarez studied at the school of Fine Arts in Bordeaux and the school of Decorative Arts in Paris. Influenced by, amongst others, Matisse, Picasso and Savignac, he began designing posters at the start of the 1980s. Michel Quarez practises the art of the painted poster based on great swathes of fluorescent colour. Superfluous details are banished. He has succeeded in retaining his artistic freedom, working directly with the advertiser, without the intermediary of an agency, refusing that any advertising slogan sully his poster: the image should suffice. He says that it is about “making the sign as obvious as the signposts on the motorways”

His designs were rapidly noticed, and earned him commissions: in particular for the town of Saint-Denis, where he still lives, for the Fête de l’Humanité in 1985 and for the festival of music in 1996. He has received awards throughout his career, prestigious international prizes, including the Grand Prize for Graphic Art in 1992 and he received two gold medals at the Warsaw Poster Biennale. In 2009, the Forney library, a historic Paris library, held a major retrospective of his work. – via Paris-is-beautiful City Guide