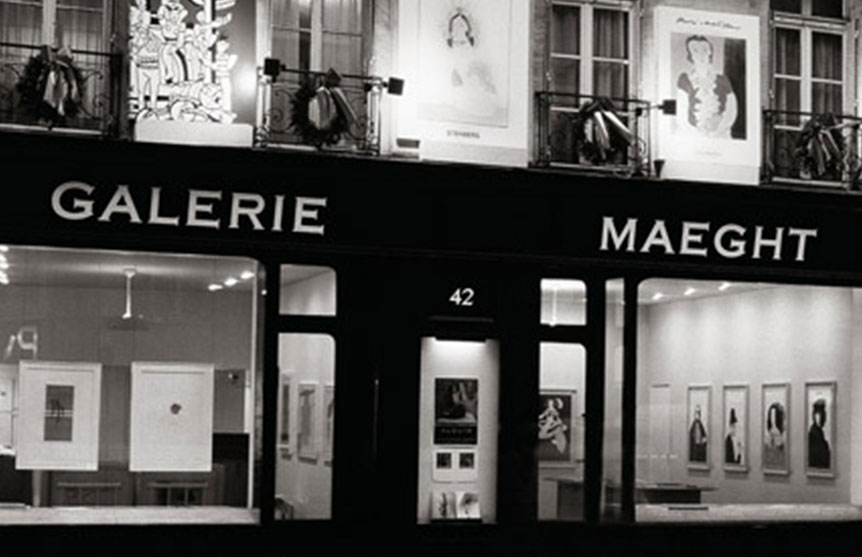 Many of our favourite posters come from the modern art gallery, Galerie Maeght (pronounced “mahg” with the “a” like make).

Galerie Maeght is a well-known art gallery that was founded by Aime and Marguerite Maeght in 1936 in Cannes. At that time, La Riviera was a refuge for many artists and writers escaping occupied areas, and the Maeghts met an incredible array of talent, including the Van Velde brothers, Picasso, Matisse and Pierre Bonnard.

It is perhaps due to Bonnard that Galerie Maeght established its reputation within the art world; the story goes, that Pierre Bonnard had walked into the Maeght’s print shop and asked Maeght to print a program for a Maurice Chevalier concert with one of his lithographs, which Maeght accepted. Marguerite placed one of the lithographs in the print-shop window and one day, a man walked into the shop and asked her how much the program was.  She didn’t know if Bonnard wanted to sell it so to put the man off, she quoted him an enormous price. The man agreed!…and so it began.

Galerie Maeght is now based in Paris and Barcelona and remains as a meeting place for artists and poets. Artists including Bonnard, Braque, Matisse, Picasso, Miro, Chillida, Calde and Tapies, to name a few, have held exhibitions at the Gallery, while the Gallery itself has hosted such exhibitions as André Breton and Marcel Duchamp’s 1947 “Le Surrealism”

Gallery Maeght is arguably the most important printer of lithographs and etchings in the world.